My most recent project was completed on 20 September 2018: an embroidered map of the New Zealand coastline. This is its story.

I spent most of February and March 2018 travelling around New Zealand. I knew I’d want to commemorate this trip somehow – it had been some 9 years in the planning! – and as I intended to travel extensively across both islands, I wanted to somehow create my own route map as I went.

My original idea was to find some fabric that already had a NZ map printed on it, then embroider the route I was travelling. So at the start of my trip, I picked up a couple of free road maps from the AA shop in Kerikeri and set off for the local haberdasher’s to buy some fabric.

Then I hit obstacle #1. I couldn’t actually find any decent fabric featuring a map of NZ. So, I decided instead to make my own map by stitching the coastline on a piece of plain fabric, working on it gradually as I went around the country.

(Spoiler alert: after completing the entire coastline, it was clear that the whole piece would actually look far too busy visually if I then also added the route I’d travelled, even if in a different colour thread. So I left it just as a coastline.

And a reflection: Now that it’s finished, for me the real beauty of the piece is that the route I travelled is there – but it is invisible to anyone who doesn’t know this story of how it was created and just looks at the finished object. My route is instead captured in my memories of working on the map, little by little, stitch by stitch, while I travelled up and down that beautiful country with some fantastic people.

And what’s more, the visible and irregular grain of the wood used for the frame, the occasional tiny wrinkle in the fabric and the minuscule knots in the thread on the back of the artwork which are now slightly visible from the front – these ‘perfect imperfections’ all resonate beautifully with the organic nature of the project, an idea which developed once I’d arrived in New Zealand and which travelled with me all the way, growing and changing and becoming almost as much a living, breathing member of the group as my other travel companions!)

The AA maps I’d picked up became my template for the coastline. I spent several hours preparing them: drawing over all land edges (coastline, islands, lakes) with a black pen so it would be visible when I laid the fabric on top and I’d be able to trace over it; laying the two maps (north + south island) next to each other and painstakingly matching them against Google Maps to the correct orientation so that the total final image would be geographically accurate; then creating a makeshift lightbox with a coffee table and lamp so I could actually project the coastline through the fabric and use the maps as a stencil!

I spent a week or so in the north, around the Bay of Islands, before continuing my journey south. So I decided to start my embroidery here. 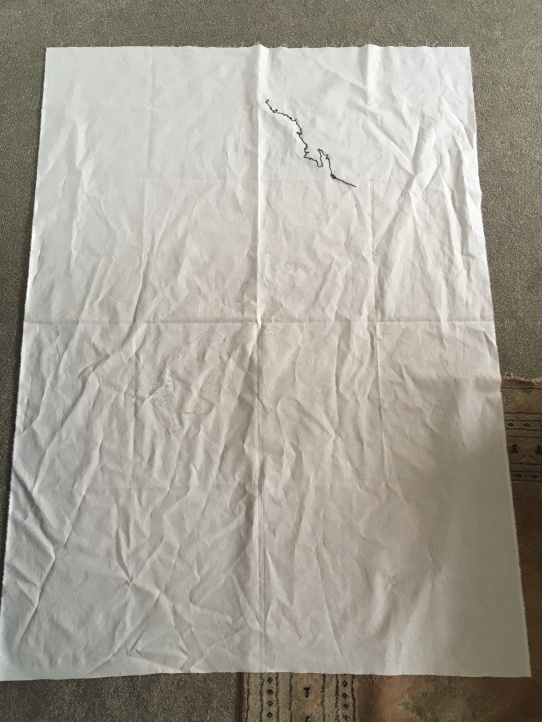 Starting around the Bay of Islands

North Island coastline done! Except for all the islands and lakes…

I kept working my way around the coastline, matching almost exactly the part of the country I was in at the time. At one point I took an 11-hour train ride from Wellington back up to Auckland, working on Fiordland the entire way… 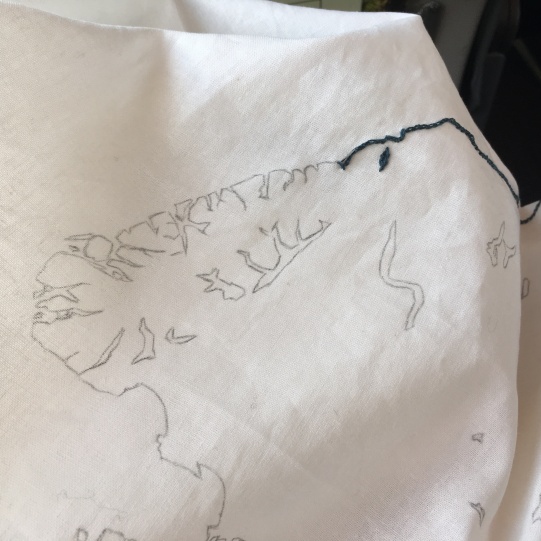 After 5 weeks in New Zealand, I wasn’t quite finished, so I had to continue it on my way home, continuing around the world back to the UK via the USA. Here I am in Washington, DC, with just the eastern coast of the south island left… 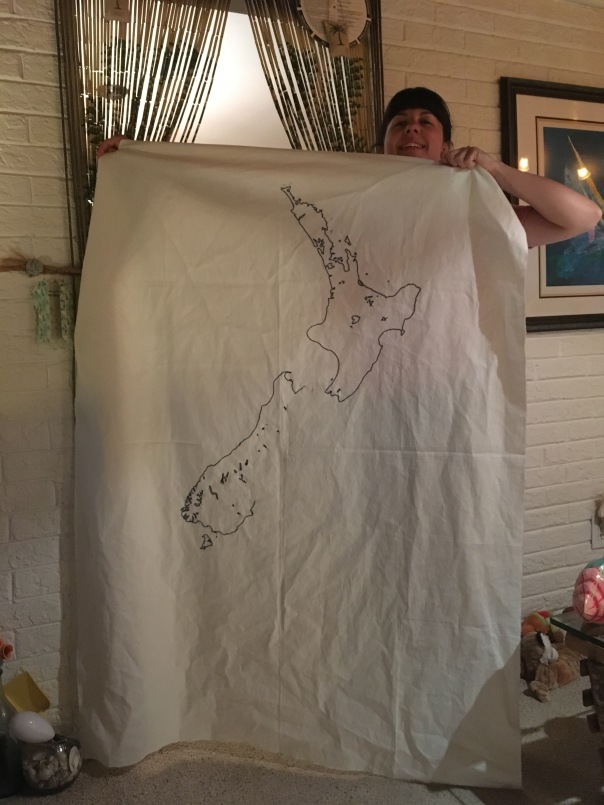 I’d never tried to stitch a coastline before. It’s incredibly fiddly and obviously at this scale there’s only so much geographical accuracy that’s humanly possible! I decided to leave the hardest bit – the Marlborough Sounds – till last… 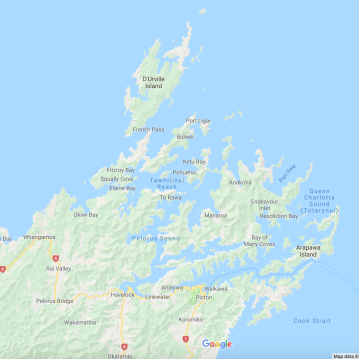 How this bit of NZ *really* looks…

I was quite pleased when the whole coastline, including all islands and lakes, was finally done! (In Pennsylvania by this point, far from NZ, but still not quite finished…) 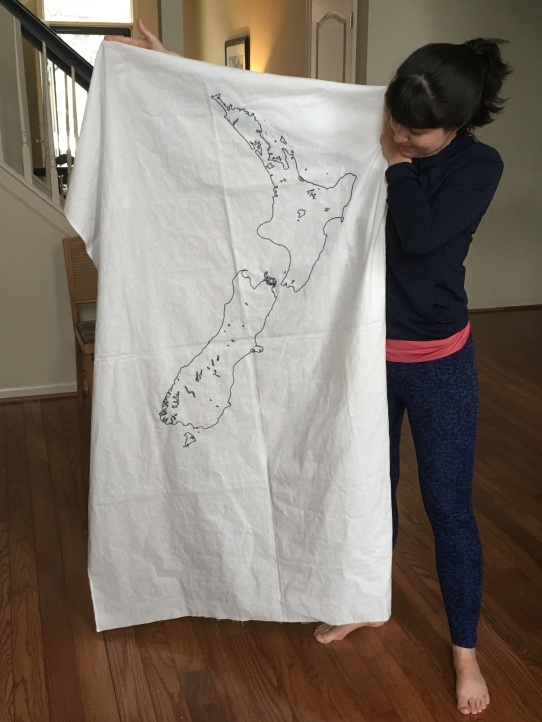 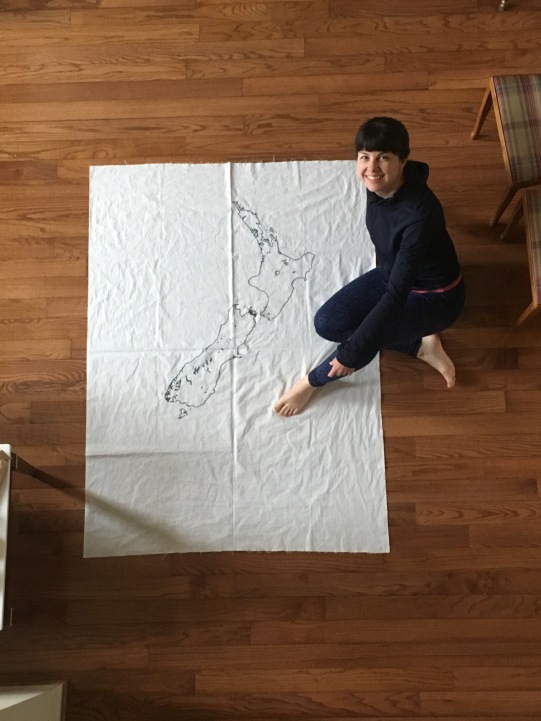 The last step, some 4 months later, after various Life Events which delayed all my art projects for a while, was to add a title and get the whole thing framed. I spent a while looking for lettering inspiration online and eventually created a hybrid of my favourite styles.

For a while, I considered using the Whakarare typeface for its associations with the indigenous people of New Zealand (Aotearoa), but ultimately I wasn’t comfortable with the sense of cultural appropriation this evoked – since I don’t come from or identify with Maori heritage and nothing else about my map was related to the rich history and culture of the Maori population, why use a typeface that was specifically designed to represent the Maori language? (And even aside from this, there would have been practical limitations – a number of English letters, including Z and D, do not occur in the Maori language, so weren’t included in the typeface, meaning I’d have to design those myself anyway!) If you’re interested, you can read more in this very informative blogpost about the Whakarare typeface.

In a crazy coincidence, when I popped into the local picture framer’s workshop/gallery with my piece to ask for advice on framing fabric, I discovered that the framer was actually from New Zealand herself! After at least an hour talking about options (and about my trip!), we decided to run a demo workshop together in her gallery, with the aim of showing attendees how to frame fabric, using my map as a live example.

I had to get all the creases out. Oh man. This piece of fabric had travelled thousands of miles, across two continents and two oceans, folded in a paper bag, inside a plastic zip wallet, inside my hand luggage. Ironing it at the end of all that turned out to be a bit of an adventure in itself.

The fabric I’d bought all those months ago was linen – and this didn’t seem a big deal at the time, when I was just trying to select the right shade of off-white for the fabric and the right shade of blue-green for the thread. But linen creases and wrinkles if you so much as look at it the wrong way and this became intensely frustrating when I needed to transport it from my house and have it arrive at a gallery still in a decent condition for being framed.

I spent 2 hours ironing and steaming before taking it to the framer’s. This involved some creative use of a very hot bath and a travel washing line which, appropriately, I’d originally bought for my NZ trip! 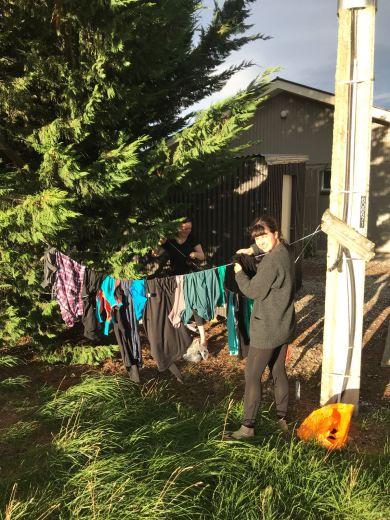 6 months earlier, using the travel washing line as it was actually intended to be used… in New Zealand! How poetic.

Fortunately, steaming it pretty much did the trick and when it arrived at the gallery I was able to use hair straighteners to get the very last couple of wrinkles out. And in the end, these all disappeared once the fabric was stretched over the backing board anyway.

After the workshop, the mounted artwork was ready to be fixed into the frame. This was still quite a complicated task, not least of all cutting a large-size mount and mixing a custom shade of paint to match the precise blue-green of the thread in the embroidery. I left all this in Felicity’s capable hands. My part of the process was now over…

…until it was time to pick up the beautifully framed and finished piece – and, naturally, to beam with pride for a photo at the moment I unwrapped it. 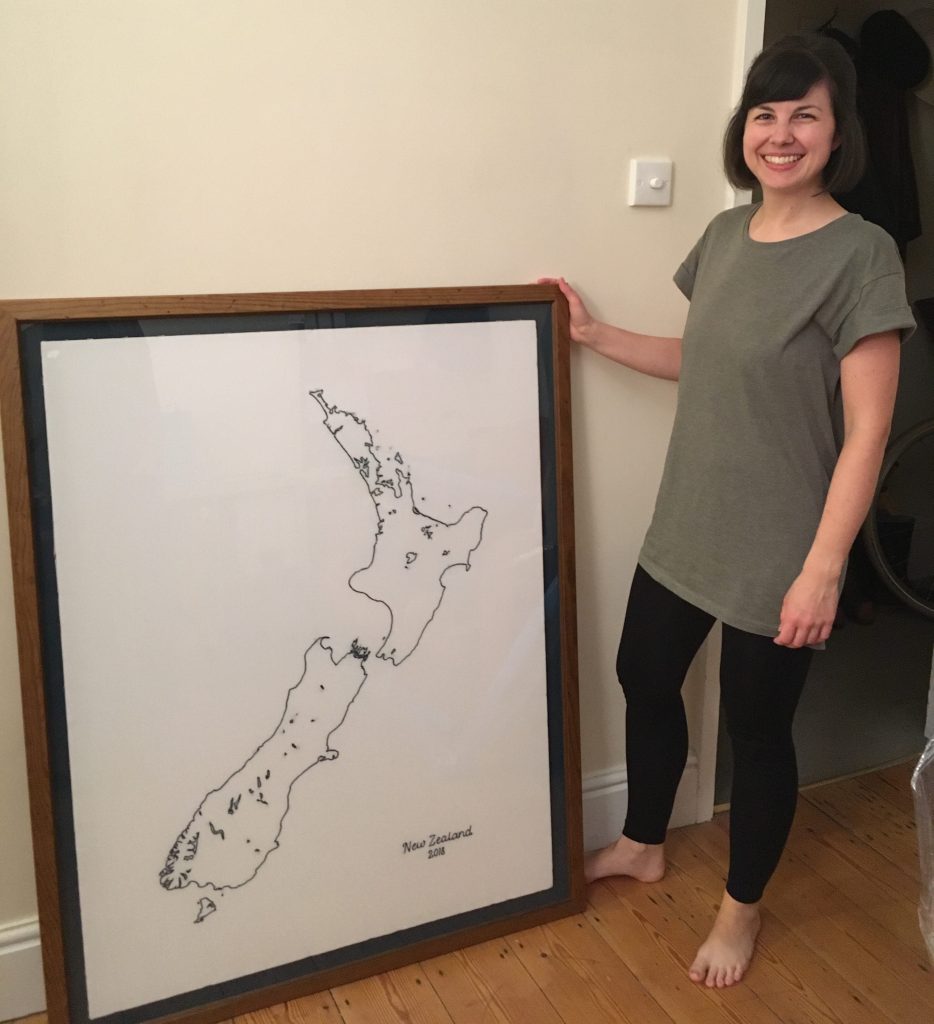 This map is dedicated to the memory of my very dear friend Wojtek, who narrowly missed getting to see this project and would have loved to hear about it.

“Life is long if you know how to live it.”

Now this project is over, just to satisfy my nostalgia, here are some of my favourite shots from my 2018 NZ trip for you to feast your eyes on.